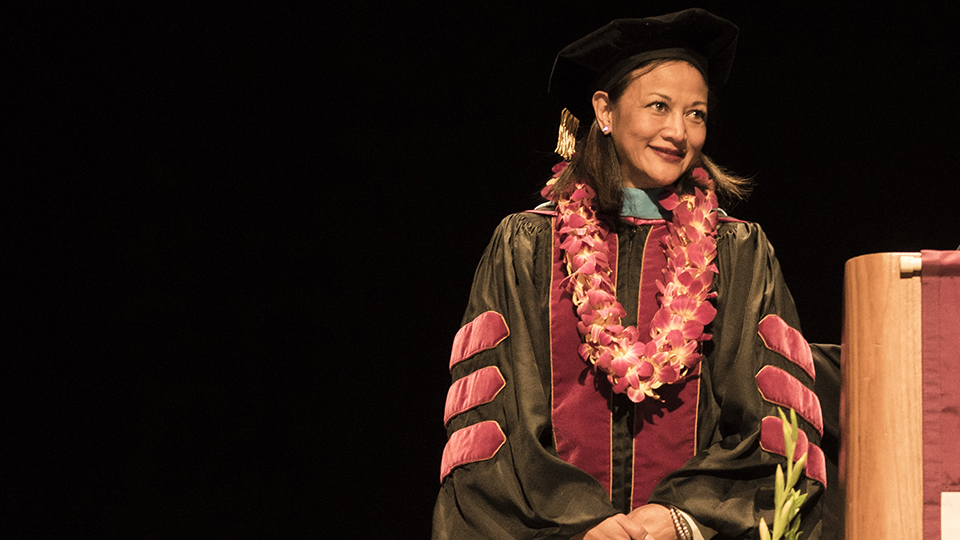 Adelaida Severson, who leads one of the nation’s top satellite communications companies, was inducted into the Alumni Hall of Fame at Arizona State University’s Walter Cronkite School of Journalism and Mass Communication today.

Severson, who graduated from the Cronkite School in 1995 with a master’s degree and later a doctorate in public administration from ASU, leads Bushtex, which provides critical support to broadcasts of high-profile news events around the globe, as president and CEO.

Severson was inducted into the Cronkite Alumni Hall of Fame during the school’s fall convocation graduation ceremony at ASU Gammage. The Hall of Fame celebrates the achievements of Cronkite School alumni who have made significant contributions to journalism.

“I am humbled and honored to be recognized by my university and represent our alumni,” Severson said. “It’s amazing how far the university has come since I graduated, and to have a diploma that says Arizona State University is incredibly overwhelming.”

Severson founded Bushtex in 1994 with her husband Barry Severson. Today, the satellite communications company, based in Gilbert, Arizona, is a leader in remote satellite transmissions. Bushtex has provided critical support to broadcasts of many high-profile news events, including major conflicts, Olympic games and countless hours of election coverage.

Today, the Adelaida and Barry Severson Family Cronkite Global Initiatives Suite is the headquarters to a half-dozen international journalism training and exchange programs and study abroad programs for students.

“Adelaida, you are a role model for our students, and you represent what it means to be a graduate of the Walter Cronkite School of Journalism and Mass Communication,” said Cronkite School Dean Christopher Callahan at the convocation ceremony.

Severson, who was born and raised in Hawaii, started her career as a journalist and reporter before entering the satellite broadcast industry while working in Los Angeles. She has supported the broadcasts of numerous high-profile events, including Super Bowls as well as the Summer and Winter Olympics since 1990.

From 1994-2003, Severson served as director of special events at ASU, where she coordinated and facilitated events and fundraisers for the President’s Office.

Severson serves as an ASU trustee and vice president of the ASU Asian Alumni Chapter. She also is a member of the International Society of Satellite Professionals, the Asian American Journalists Association and the American Society of Public Administrators.